York County John Doe was a male found murdered in Pennsylvania. 13 men have been ruled out as the decedent.

Isotopic testing revealed he was likely native to the southern portion of the United States and had spent an unspecified amount of recent time in Pennsylvania before his death.

Recent DNA testing has revealed that his heritage is 75% black and 7% white. Two new reconstructions were released to reflect these findings, one incorporating facial injuries.

The decedent is connected to the following regions and surnames: 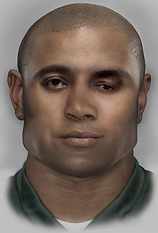