Washington County John Doe was a teenager whose remains were found in 1998. He had died sometime between 1914 and 1925. 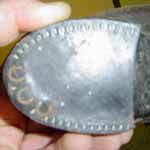