Ventura County Jane Doe was a young woman found murdered in 1980 after she was raped, stabbed and strangled. She was pregnant with a boy who also died. Her murder was solved in 2018 after Wilson Chouest was previously linked by DNA to her and Shirley Soosay, who was also previously unidentified. He denied knowing their names.

Recent developments from genealogical research by the DNA Doe Project have uncovered potential surnames and locations where the victim possibly originated. Investigators have also identified the father of her baby, but were unable to gather any new information from him.

The woman's body was left at the edge of a parking lot of a high school and was found hours after her death. It is possible that she was abducted from Los Angeles, Kern, Ventura or Tulare Counties. It is theorized she was taken to the scene from a significant distance. She may have been hitchhiking near the College of Sequoias in Visalia, California. It is unknown if this theory originated from a sighting.

Her case was linked by DNA to Wilson Chouest who also killed Shirley Soosay. He was convicted in May 2018.

The DNA Doe Project released the surnames and locations of distant relatives of the Jane Doe, in hopes to narrow the search for her identity. The list included:

In 2021, investigators identified the father of her baby as a Honduran immigrant who had ties to the Central American community within the Koreatown district of Los Angeles, but were unable to get any new information from him. 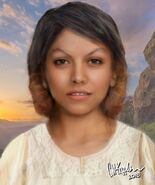 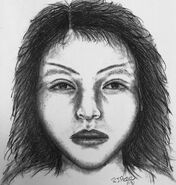 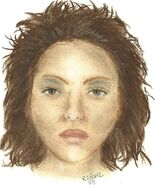 Crime scene photograph of the body