Unidentified Wiki
Register
Don't have an account?
Sign In
Advertisement
in: Male, Killed in action, 1943 disappearances,
and 9 more

Thomas Frank Johnson was a United States Marine private who was killed in action during during the Battle of Tarawa on Betio Island of the Gilbert Islands, now part of Kiribati. His remains were identified on May 6, 2020. His brother, Hugh, was also killed in that battle and remains Missing in Action.

Thomas Johnson was born on December 30, 1924 to Thomas and Muriel Johnson in Hollister, California. He was the third of four children and was raised on a dairy farm in Hollister. Military service was a family heritage to the Johnson family; Thomas Sr. fought in World War I with an observation balloon unit.

On July 20, 1942, Johnson joined the United States Marine Corps from San Francisco, California. His military service number is 418629. He was a Private First Class in Company B, 1st Battalion of the 6th Marines (A-1/6) of the 2nd Marine Division. Johnson participated in the Battle of Guadalcanal and was wounded. He recovered in a hospital in New Zealand where he reunited with his brother, Hugh, who joined the Marines a couple years earlier and was also wounded from the Battle of Guadalcanal.

The 2nd Marine Division landed on Betio Island on November 20, 1943 as part of Operation Galvanic, the U.S. Invasion of the Gilbert Islands. The mission was to take control of the airfield on the Tarawa Atoll so that Japanese Imperial Army would be less close to the United States and the United  States would be closer to Japan. Most of the fighting would occur on Betio Island as it was the largest of the islands on Tarawa Atoll. This battle would prove critical for the American offensive and the first time they faced serious Japanese opposition as they were well-supplied and prepared and fought to the last man standing.

On the first day of the battle, Hugh was reportedly killed in action, although the circumstances of his death are unknown. On the night of November 22, 1943 two days later, Thomas ran forty yards under heavy fire to pick up ammunition for his squad as they were running out of it during a Japanese counterattack. He was struck by shrapnel on the return, but managed to deliver the ammunition before succumbing to his wounds.

On November 23, 1943, U.S. Forces would take over the island. Overall, 1,696 U.S. Marines were killed and 2,101 were wounded and 4,690 Imperial Japanese Army soldiers and construction laborers were killed and 146 were captured.

After his death, Johnson was awarded the following medals: the Purple Heart and the Silver Star. The awards were accepted by his father. His name is also inscribed within the Courts of Missing in Court 4 at the Honolulu Memorial in Honolulu, Hawaii.

The Johnson family was informed of the deaths of Hugh and Thomas on December 23, 1943. It gave the Johnson family much grief, especially as they were informed just days before Christmas. Their deaths also prevented their other brother Kenneth, not being allowed to serve overseas.

Johnson's remains were recovered and buried in Row D of Cemetery 33 on Betio Island. However, they were not recovered when the 604th Quartermaster Graves Registration Company conducted remains recovery operations between 1946 and 1947. In 1949, a military review board declared him non-recoverable. The same also applied to Hugh.

In March of 2019, History Flight Inc. discovered what is thought of as Cemetery 33 on Betio Island. The remains of U.S. Marines found were sent to a DPAA laboratory and identified based on historical records, circumstances, dental analysis, and DNA evidence. Using these techniques, Thomas Johnson's remains were identified on May 6, 2020.

A funeral service was conducted for him at 2:00 PM on November 23, 2020 with full military honors at the Northern California Veterans Cemetery in Igo, California. He was the first missing serviceman killed in action to be buried at the cemetery. The funeral service included a rifle volley and a flyover of military aircraft from Marine Corps Air Station Miramar near San Diego, California. A gravesite for Hugh is reserved right next to Thomas when the former's remains are found and identified. 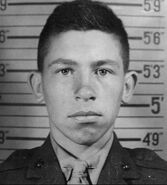