Incineration (homicide)
Tennenlohe John Doe was a man found on May 1, 1983 near Tennenlohe, Germany next to Tennenlohe Jane Doe.

At half past three in the morning, a motorist reported a fire at the 'Rastplatz Breslau' (today 'Rastplatz Weißer Graben') on the A3 near Erlangen/Nuremberg. When the firefighters arrived, they quickly discovered that it was not a forest fire, but human bodies with flames still several meters high.

Tennenlohe John Doe and Tennenlohe Jane Doe were struck from behind with an object, doused with gasoline and set on fire - traces of soot in the lungs of the two victims indicated that they were still breathing when they were set on fire.

Since a valuable watch was found, investigators ruled out a robbery-murder. This consisted of parts that made a reference to Italy and Switzerland. All other items pointed to Italy. Despite extensive investigations, also in Italy, the two unknown persons could not be identified until today.

Even a broadcast on Italian television in 2017 did not yield any new clues. 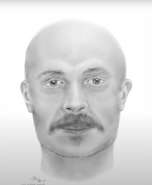 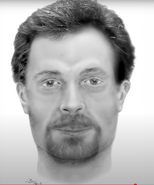 Sketch with beard and changed hairstyle. 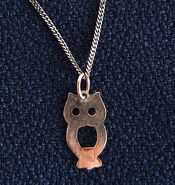