Unidentified Wiki
Register
Don't have an account?
Sign In
Advertisement
in: Cause of death not stated, 2011 discoveries, People found in Delaware,
and 10 more

Sussex County Doe is an individual whose hair was found at Fenwick Island State Park in Sussex County, Delaware on July 9, 2011.

The clump of hair was discovered in the afternoon by a sixty-seven-year-old fisherman from Grasonville, Maryland after his hook was entangled in debris. He also found a pair of sunglasses, a shark tooth necklace, and hair bands and turned everything in to the police the next day.

DNA analysis confirmed the hair was human and it yielded a full, single-source mitochondrial profile that does not currently match any other known missing persons case. 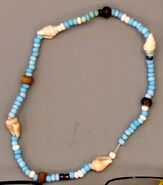 Front side of shark tooth.

Rear side of shark tooth.

Left side of glasses.

Right side of glasses.