Startex Jane Doe, also known as Ms. Startex, was a female who was discovered under a couch alongside Highway 290 in Startex, South Carolina in 2011. Over 80 women have been ruled out as being the decedent.

She is currently undergoing testing by the DNA Doe Project. A new reconstruction was made for the decedent in 2021. Genealogy testing found that she had ancestral ties to the Southeastern United States and Puerto Rico. 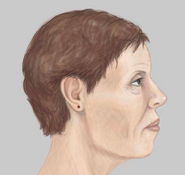