Suspected homicide
Randi Stacey Boothe-Wilson (July 10, 1961 - c. 1994), (known by her middle name) was a woman found deceased in North Carolina in 1995. She was identified in February 2019. No cause of death could be assessed, yet the cause of death remains to lean towards foul play.

On October 28, 1994, Boothe-Wilson disappeared from her mother in law's home with the intention of meeting her sister. Her estranged, visiting husband claimed she called him a day later from Manhattan, asking for him to pick her up. Boothe-Wilson and her husband argued about their strained marriage. Her abandoned vehicle was located in a disputed location.

Her husband later found letters addressed to her children explaining she was leaving them. Later, her debit and credit cards were mailed to him. The deed to her vehicle was stolen from her sister's apartment in January 1995.

Some believe she willingly left the state and had relatives living in North Carolina. She had also spent time in the area for military assignments.

Her remains were discovered in Jacksonville, North Carolina on December 6, 1995. No cause of death could be determined, yet the placement of the body suggests that she was murdered. It is possible Boothe-Wilson died the day or days after she disappeared, suggested by the fact the clothes she wore when she disappeared were the ones she was found deceased in.

Although Stacey was African-American, her recovered remains were believed to belong to a white woman. 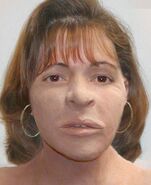