Unidentified Wiki
Register
Don't have an account?
Sign In
Advertisement
in: Female, Homicide by stabbing, Cases with Wikipedia articles,
and 17 more

Shirley Ann Soosay (1945 - July 14, 1980), was a woman found stabbed to death in McFarland, California. She may have possibly used the name "Rebecca" or "Becky Ochoa". In 2015, DNA evidence linked her to Ventura County Jane Doe, not to each other, but rather to their killer, who was convicted almost 38 years after their deaths.

She was identified by the DNA Doe Project in April 2021, after her niece recognized the reconstruction as her when she saw it on one of the Project's public outreach announcements. Her identity was confirmed when the relative uploaded her DNA to GEDmatch. Soosay is one of the first members of the First Nations People to be identified through forensic genealogy.

Soosay was born and raised on the Samson Cree Nation reserve in Alberta, Canada. She had seven siblings and remained close to other family members, including her niece. At age 14, her father died, causing difficulties with the family's ability to maintain the ranch he owned. This triggered financial strain, and additional opportunities for work were scarce in the area. She later chose to leave the reservation in search of a job, intending to relocate to the nearby city of Edmonton.

She eventually came to reside in Vancouver, British Columbia, where she got married and gave birth to two boys. The troubled relationship with her husband failed; the children were placed in foster care. Soosay was unable to regain custody and became homeless. The emotional toll triggered her to use drugs and alcohol.

Periodically, Soosay returned to the reservation to visit family members, who observed a change in her personality. She was last seen by relatives in 1977 for the funeral of her brother, where she expressed her desire not to come back when asked. After mentioning the possibility of visiting a friend in Seattle, Washington, her mother voiced concern that "no one would know" her daughter if she were to leave. It was suggested to Soosay that she should consider getting identifying tattoos, which she said could be possible in the future.

After her departure, she maintained contact with loved ones by sending letters, which ceased in 1980. Family members searched the Vancouver community for a decade, remaining hopeful that their loved one would be alive and well. Eventually, they resorted to visiting cemeteries, believing Soosay had died.

Soosay was found deceased in an almond orchard in McFarland, California, having been sexually assaulted and stabbed to death. A maintenance crew made the discovery; she was left in a fetal position while lying on her side.

She had died shortly before, having been recognizable enough for visual identification. She had not been disrobed, and liquor bottles were at the scene, which were collected for potential evidence.

Upon examination, the victim's age range was set at between 25 and 45 years old, of Native American or Hispanic descent. Toxicology tests revealed she had consumed alcohol, a level high enough to cause disorientation, prior to being attacked. She had suffered nearly 30 sharp-force injuries to her upper body. Fingerprints were lifted from a bottle of beer left near the body, and scrapings from beneath her fingernails were obtained, as she had fought back. Her clothing was also retained, which yielded valuable DNA that was developed in the years following her murder.

Early phases of the investigation revealed that she may have been from Washington, and may have gone by the name Rebecca/Becky Ochoa. She also may have been employed at an apple orchard. Two tattoos she had, bearing the name "Shirley" and "Seattle" were believed to be suggestive of information relating to her identity, and where she possibly had ties to. She was not believed to have originated from the county.

After media appeals were released, a woman tipped police off that she believed the victim had been a waitress at a bar, going by the name "Rebecca Ochoa," bearing the same tattoos. Nothing came of this lead, and attempts at fingerprint matching also failed. A tattoo parlor in the city of Bakersfield was shown the tattoos, and the employees referred investigators to an area within Los Angeles that used similar techniques and contained a large Native American community. After this was pursued, it was determined the victim did not likely receive their services. After the case was reopened in 2003, a visit to Seattle, Washington, confirmed that location as the most likely origin.

In 2015, she was linked to convicted serial rapist Wilson Chouest, whose fingerprints and DNA matched the forensic evidence recovered from the crime scene. In addition, the Ventura County Jane Doe, whose body was discovered two days later, was also matched to Chouest. As these two victims remained unidentified at the time of the suspect's identification, investigators sought the assistance of the DNA Doe Project, which gained attention for resolving several long-term cases in the months prior. In July 2018, a jury convicted Chouest and condemned him to life in the California Department of Corrections. He had been imprisoned ever since his apprehension in September 1980. He was also known to have committed violence against a woman in 1977. He was 30 years old at the time of both murders.

Although Wilson Chouest denied involvement or even knowing either of his victims, he had confided in members of a family he was staying with in the summer of 1980 that he needed help cleaning blood from his vehicle after striking a deer while driving. He only revealed to one person the truth; that the source was from a woman he met at a bar, whom he killed and left “in the middle of nowhere.” Following his conviction, he rescinded his previous denials and confirmed to police that this victim had been the then-unidentified Shirley Soosay, taken from the city of Hanford. When asked about the Ventura County victim, he described her as a hitchhiker picked up in Visalia. Both were strangers to him.

In February 2020, it was revealed by the DNA Doe Project that she was of First Nations ancestry and had ties to Alberta, Saskatchewan, and Manitoba as well as Montana. One of her ancestors was a member of the Cree nation. After speaking about her aunt’s disappearance the same month, Violet Soosay was encouraged to submit her DNA to the GedMatch database, as it appeared that the Kern County victim was likely Shirley. Violet then viewed the updated reconstruction alongside restorations of the victim’s tattoos, strongly believing this possibility. Violet Soosay had seen a previous revision of the image during initial media coverage surrounding Chouest’s connection to the victims, only to be discouraged after the mentioning of a potential identity being Rebecca Ochoa.

The match was eventually confirmed by the DNA Doe Project, who announced the identification in April 2021. 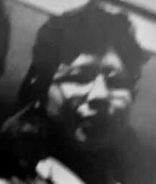