Undetermined
Sharkey County John Doe was a child whose skull was located in early 2014 in a drainage canal.

He is currently undergoing testing by Othram, Inc. Recent testing has revealed he was African American, that he was born between 2000-2004, and that he likely died between 2007-2014. 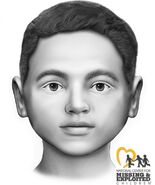 Image depicting the child as White