Unidentified Wiki
Register
Don't have an account?
Sign In
Advertisement
in: Male, Black, People found in Illinois,
and 12 more

"Shannon Night" was the alias a man who suffered from a stroke and was brought to Nortwestern Memorial Hospital in Chicago, Illinois. He had suffered from a traumatic brain injury that left him with no memory of his identity.

Records showed he had previously been arrested in Cook County, where he went under multiple aliases including Shannon Night and other variations. He has been in state care since 2007.

Shannon believes he has a son and possibly a wife. He carries a red folder — inside of which he writes notes in an effort to jog or remember his past. 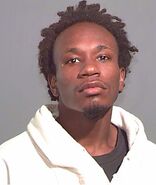