Homicide
Seminole County Jane Doe was a woman found in Florida in 1974. Gerald Stano claimed responsibility for her death, stating she was a hitchhiker he had picked up. 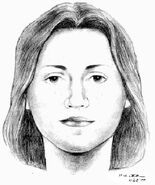