Unidentified Wiki
Register
Don't have an account?
Sign In
Advertisement
in: Featured cases, Female, Homicide by beating,
and 20 more

Sarah Lynn McWaters (December 13, 1977 - c. 1981) was found inside of a metal drum in Bear Brook State Park in Allenstown, New Hampshire. Along with her remains, another victim was found. She is believed to have died around the same time as her mother and sister found in 1985.

McWaters was found fifteen years after her mother and sister were found in the Bear Brook State Park.

It was believed that the four victims had died between 1977 and 1985. Through analysis of their dental information, it is presumed that they may have been of Native American ancestry. Like her older sister, she has a gap between her front teeth.

In early 2017, the middle child's father was identified as Terrence Peder Rasmussen, who remained unidentified until 2017. He is believed to have killed all four of these victims and possibly his former girlfriend, Denise Beaudin. Rasmussen died in 2010 while serving time for another murder.

In June 2019, McWaters was identified, along with her mother and sister. The middle child remains unidentified. 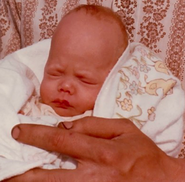 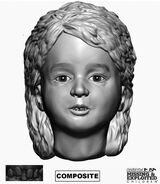