Unidentified Wiki
Register
Don't have an account?
Sign In
Advertisement
in: Male, Deaths by vehicle accident, Young adults,
and 9 more

Salvador Regalado Barajas is a man who was killed from a skull fracture to due to an auto accident in on the highway in Nogales, Arizona on October 21, 1962 at about 9:05 AM. He was a passenger in a vehicle driven by Nicholas M. Sullivan, although details on the accident and whether Sullivan was killed as well or not is unknown.

His body was identified on February 13, 1963 with his identity verified by his funeral director. According to the affidavit to correct his death certificate, Regalado Barajas was an unmarried laborer from Guadalajara, Mexico who was born December 17, 1933 or 1934.

He was buried on December 9, 1962 at the Nogales City Cemetery in Nogales. 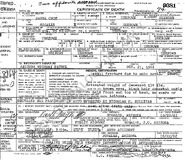 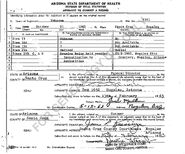 Second part of the affidavit to correct his death certificate.