Unidentified Wiki
Register
Don't have an account?
Sign In
Advertisement
in: Male, Cause of death not stated, White,
and 10 more

Not stated
Ryszard Gorczyca was a man found murdered in March 1994 and identified in August 2020.

On March 3, 1994, a dead man was found by forest workers: wrapped in a German army sleeping bag and blue garbage bags. Nearby, a green sleeveless vest was found, which it was not clear belonged to the dead man.

Two spades were also found, which investigators believed were used to bury the body.

An autopsy revealed injuries that indicated a violent crime - whether these were stab wounds or blows is unknown. Further, they narrowed down the time of death to between October 1993 and March 1994, and that the deceased was not killed at the place where he was found, but was merely dumped there by at least two people.

Although extensive investigation was conducted, the dead man could not be identified.

In 2020, through fragments of fingerprints of the dead man, a match was finally found: according to the results of the investigations, the person found in Idar-Oberstein was Ryszard Gorczyca.

Since he did not really feel at home in Idar-Oberstein, Ryszard often returned to his native Poland. For this reason, his family also assumed that Ryszard had gone back there.

Since the identification of Ryszard Gorczyca in late summer 2020, there has been no further news in this case. 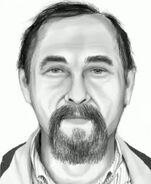 One of two spades found nearby