Unidentified Wiki
Register
Don't have an account?
Sign In
Advertisement
in: Male, Homicide by beating, Middle age,
and 11 more

Roberto Higüey Alejandro Caraballo, formerly known as "Jack in the Box", or simply as "Jack", was a man found murdered in Michigan in 2002. He had been beaten to death and was set afire after his death. His body was inside of a chest that was likely disposed of by two or more people. 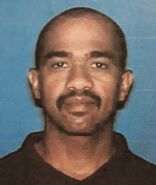