Unidentified Wiki
Register
Don't have an account?
Sign In
Advertisement
in: Male, White, People found in Illinois,
and 14 more

"Robert Rockefeller" was the alias of a man who was discovered lying off the curb of an exit ramp off Lake Shore Drive in Chicago, Illinois. He had also used the names Michael Demith and Michael Demich.

The man was found with a shopping cart full of spoiled food with possible heatstroke.

Due to this, he was hospitalized for treatment and became a ward of the state. Following his treatment for heatstroke, he was admitted into a Northlake nursing home.

Prior to becoming a ward of the state, he had been arrested multiple times and gave a differing name each time. 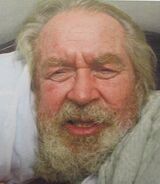