Unidentified Wiki
Register
Don't have an account?
Sign In
Advertisement
in: Male, White, Reconstructed by the Parabon NanoLabs,
and 18 more

"Robert Cooper" is the alias used by a man who is the prime suspect in the 2004 murder of Oakey Albert "Al" Kite.

On May 25, 2004, the body of Oakey Albert "Al" Kite Jr. was discovered in the basement of his residence in Aurora, Colorado. He had been bound, beaten, tortured, and stabbed.

The victim's wallet and cell phone were taken from the scene. The cell phone was later discovered in a payphone booth.

An unidentified man attempted to use the victim's debit card at an ATM following the murder. A surveillance video from the ATM shows a man wearing a ski mask driving the victim's pickup truck. The truck was later discovered near the victim's home.

The primary suspect in this murder case is a man who rented a room from Kite prior to the murder. The renter provided completely false information about himself, including the alias Robert Cooper. Witnesses who lived near Kite claim that he would often turn his face away when people other than Kite were nearby.

The perpetrator went to great lengths to conceal traces of his identity, however, some blood left at the scene was ascertained to be the perpetrator's. He is believed to be associated with the Turkish Hezbollah due to a similarity in foot flogging techniques used by the perpetrator on his victim and the techniques utilized by this organization. Witness statements and the perpetrator's DNA profile also link him to the Balkan area.

Various witnesses, mainly other landlords who had been approached by the same man as well as the victim's girlfriend, provided descriptions of him. In addition to the surveillance footage of the suspect and witness statements, DNA phenotyping has been utilized with the help of Parabon NanoLabs in order to ascertain his physical appearance. Genetic genealogy has been successfully used to identify his relatives in the Balkans.

Second angle of Cooper at the ATM

Third angle of Cooper at the ATM 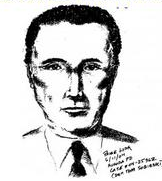 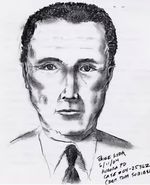 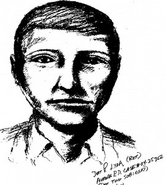