"Randolph Houser" was the possible name of a teenager or young adult killed by policemen in 1968.

There is no official ruling on whether the decedent's death was ruled a homicide or justifiable, and there is no mention that he posed as a threat to the police officer's.

He possibly used the name Randolph Houser while alive. 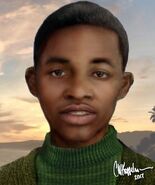 Newspaper article, which was written the day the decedent was shot.