Unidentified Wiki
Register
Don't have an account?
Sign In
Advertisement
in: Male, Cause of death not stated, Race unknown,
and 19 more

Port Renfrew John Doe was a man whose dismembered feet were found on Botanical Beach. The rest of his body has never been found. 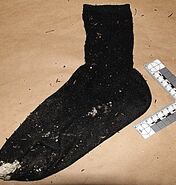