Undetermined
Pinellas County John Doe was a man whose remains were found in a park in 2016.

According to the Parabon NanoLabs Snapshot phenotype report, the following characteristics were estimated: 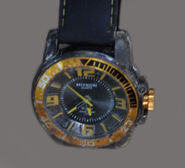