Peggy Ann Elgo (1963 - c. January 2, 1983) was a woman who disappeared at an unknown date in 1983. Her remains were discovered later that year, but she remained unidentified for nearly 37 years. She was identified in March 2020.

Elgo disappeared under unknown circumstances. Her remains were discovered on June 7, 1983 near State Route 89. The cause of her death was not disclosed, but her head was not recovered.

The body was also decomposed and mistakenly determined to belong to a black woman; she was actually of Native American descent. The victim was estimated to be between 20 and 25, at a height of 5'2. Only a partial amount of hair was recovered.

At the time of her discovery, she was dressed in athletic-style clothing, including brown suede shoes and white socks with red and yellow stripes at the top. No other articles of clothing were apparently recovered.

Elgo was previously speculated to be Phoenix Jane Doe, until DNA ruled out the match. Afterward, a match in the CODIS database confirmed she was the decedent found near State Route 89. Elgo is survived by her son. 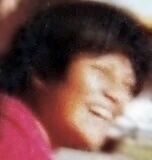