Pearl Harbor John Doe was a man whose badly decomposed body was found in Pearl Harbor, Hawaii on October 25, 2005.

The victim was located by a Navy contractor working on Ford Island floating near the seaplane ramp at 12:55 PM. His partially clothed body was pulled from the water by a Navy diver, but the skull, one or more limbs, and the right hand was not recovered. His body was taken to the Naval Criminal Investigative Service and was then sent to the medical examiner's office.

The medical investigators determined the victim died on land before he was immersed in the water about five days later. It is possible he may have drifted from any of the shorelines. Due to the decomposition of the body, a cause of death could not be determined.

Investigators speculate the victim was homeless. Partial finger and palm prints were taken of his left hand and his mtDNA is uploaded into CODIS and the University of Northern Texas. 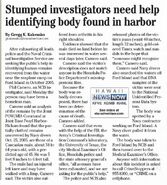