Patricia Parker was a woman discovered along a roadside in 1981. Samuel Little confessed to her murder. He claimed to have met her in Chattanooga, Tennessee. She was identified in 2020.

The woman's nude, decomposing body was found in a wooded area, near Interstate 24 and State Highway 299, in Hooker, Georgia.

In 2018, Samuel Little confessed to 93 murders. Enough confessions were verified to establish him as the most prolific serial killer in the United States.

Little's stated he met a woman at a bar on 9th Street (later renamed MLK Boulevard) in Chattanooga, Tennessee. He claimed to have strangled the woman after driving her to a secluded area in Georgia and then rolled her corpse down a hillside. Police inferred the slope was steep, based on Little's observation of the long distance the body stayed in motion.

Police were able to connect this confession to this Jane Doe, located in Hooker, Georgia. Although Little said he met the woman in Tennessee, authorities have also stated she was possibly from northeastern Alabama or northwestern Georgia. 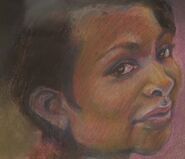