Unidentified Wiki
Register
Don't have an account?
Sign In
Advertisement
in: Male, Homicide by beating, White,
and 13 more

Oral Stuart Jr. was born in Des Moines, Iowa, on November 5, 1956. Growing up, he was nicknamed "Buddy" because he was a junior. In 1974, he joined the United States Marine Corps and was stationed at Camp Pendleton, California. The last time anyone saw Stuart alive, he had completed basic training and was on leave. He asked his family for money while on leave, but was not heard from again.

On November 10, 1974, the nude body of a young man with blunt force trauma to the head was found in an apartment complex carport on Spring Street near the 605 Freeway in Long Beach, California. Authorities could not identify the victim, so he was named John Doe #155. Investigators also initially failed to identify a suspect and so the case became cold. John Doe #155 was shortly afterwards cremated and buried at the Los Angeles County Crematorium Cemetery in Los Angeles, California.

About a dozen days after John Doe #155 was found, Stuart was labeled as a deserter by the USMC when he failed to return to Camp Pendleton. His family disputed this, saying Stuart was proud of the USMC insignia tattoo he recently got. His brother Carl said, "He was murdered. I never believed he just disappeared. He loved his family and the Marines too much."

In 2011, cold-case detectives opened the case of John Doe #155. The detectives only had the victim's tattoos to go on; "Bud" on his knuckles and a USMC insignia tattoo on his arm. Believing he may have served in the Marines, they went to the US Naval Criminal Investigative Service Cold Case Homicide Unit at Camp Pendleton and gave a description of the victim. John Doe #155's autopsy notes matched the military history of Oral Stuart Jr. When investigators showed their autopsy photographs to Stuart's family, the family confirmed them and John Doe #155 was identified as Oral Alfred Stuart Jr.

Stuart's military status was changed from being a deserter to being honorably discharged and the USMC had a full honor guard funeral for him. His John Doe marker was replaced with a headstone. Additionally, he now has a memorial marker at Section MA-479 of the National Memorial Cemetery of Arizona in Phoenix, Arizona

Although Stuart's murder is officially unsolved, Carl and investigators think serial killer Randy Kraft AKA "The Scorecard Killer" could be responsible. Between 1971 and 1983, Kraft abducted, raped, tortured, and killed up to seventy-six boys and young men along California's highways, Oregon, and Michigan.

The circumstances of Stuart's murder do match Kraft's modus operandi; some of his victims were found nude and beaten and/or were in the military. Kraft also had a scorecard that contained nicknames of his victims and it's believed the entry, "Iowa", refers to Stuart, being born in Des Moines, Iowa. Kraft is currently sentenced to death for sixteen of the murders at the San Quentin State Prison and denies any responsibility despite the overwhelming evidence against him. 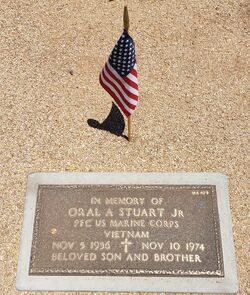