Beating
Napanee Jane Doe was a young woman whose skeletal remains were discovered near Napanee, Ontario in 1984.

The skeletal remains were located in a ditch by a jogger along a country road, approximately 5 km (about 3 miles) south of the Village of Newburgh and 4 km (2.5 miles) north of the Palace Road exit of Highway 401.

It is believed that the remains are not of a local resident but rather those of someone murdered elsewhere, possibly in Quebec, and dumped at this location. Police have exhaustively searched missing persons reports in Canada and the United States. 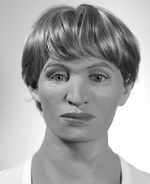