Unidentified Wiki
Register
Don't have an account?
Sign In
Advertisement
in: Female, Cause of death not stated, White,
and 15 more

Montreal Jane Doe was a woman found on the opposite side of 2019 Moreau Street in Montreal in a wooded area near the Canadian Pacific Railway. Her NCMPUR page was taken down in 2019 and she does not have a page on the Montreal Police Services website, implying she has since been identified. 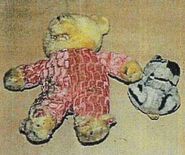