Unidentified Wiki
Register
Don't have an account?
Sign In
Advertisement
in: Male, Deaths by drowning, Black,
and 14 more

Drowning
Michael Rogers was a man who was found deceased in Lake Michigan on June 10, 2015. He was identified in 2018.

Michael was born in Cleveland, Ohio but moved to Akron when he was young. After he graduated from school in 2006, he joined the Navy. He eventually left the Navy in 2014 and returned to Akron. Shortly afterward, he moved to Chicago, Illinois for a job.

Family members had no way to contact Michael as he did not have a phone number, email address or social media account. Michael's sister, Arlene, stated that he was not suicidal and that she suspects foul play. The family plans on having his remains exhumed, cremated, and returned to Ohio.

Rogers' sister expressed she suspects foul play was involved in his death. The medical examiner could not determine the manner of death.

While unidentified, he was thought to be White or Asian. 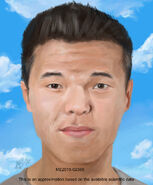