Unidentified Wiki
Register
Don't have an account?
Sign In
Advertisement
in: Male, Suicides by vehicle, 1995 deaths,
and 14 more

Michael Kirov, previously known as "Dave" was a man who died by suicide on a train track.

Kirov changed his name from Michael Lewis before leaving Manitoba, the Saskatchewan Coroners Service said. His family still refers to him as Michael Lewis.

He was identified with assistance from Othram in August 2021.

Two Canadian Pacific Railway employees watched Michael Kirov jump from a ditch and onto the railroad at 13th Avenue and Courtney Street. Initially persuaded by the employees to get away from the tracks, the man quickly changed his mind and laid down. He was run over by a train carrying 104 loaded grain cars and died instantly of head injuries.

A transient named Randy Wakelin came forward with information on January 23, 1996. Randy claimed Kirov went by "Dave" or "David," but didn't believe that was his real name. His possible name has also been recorded as "Brian" as well. The two met on July 22, 1995, while hitchhiking from Strathmore, Alberta to Swift Current, Saskatchewan. They arrived in Regina on July 24, 1995. Depending on the source, they either separated that same day or spent the night and several days together and were looking for work as carnies. They might've also had plans to travel to Calgary, Alberta for work.

Little is known about Kirov's past. He might've been from Ontario, as Randy remembered him having an Ontario birth certificate. At one point, Dave said he had plans to head "back east," most likely to New England or the Maritimes. Dave didn't like talking about his possibly wealthy family, but spoke about a former girlfriend named "Kathy" who left him for another man.

Michael Kirov was not familiar with the transient lifestyle as he didn't know about drugs, didn't understand street slang and barely knew how to hitch a ride. He was well mannered and would spread a napkin across his lap when eating at fast food restaurants, but avoided eye contact and wasn't interested in interactions. Instead, Dave was interested in Stephen King novels, expensive cars, the ocean, politics, "preppy music," and would write in a diary with a silver fountain pen. The diary, along with Dave's reported birth certificate, have never been found.

Kirov's final words to Randy were: "I'm sick of everybody." He has since been buried in Regina's Riverside Cemetery. His burial costs were paid by a local woman who heard he was being buried with nobody claiming him. 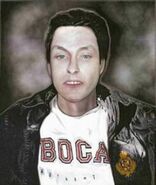