Overdose
"Mary Kofi" was the name used by a woman who died in 2006. She is believed to have been a drug courier from Ghana.

She was found outside a hospital suffering from abdominal pain. She was found to have packages of cocaine in her stomach and died in the hospital. She stated that her name was "Mary Kofi" (unknown spelling) and that she was 47 years old, but she also gave her date of birth as 27 April 1957, which would have made her 49 at her time of death. She may have flown in from Ghana. 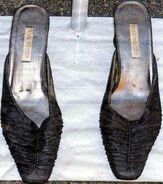