Unidentified Wiki
Register
Don't have an account?
Sign In
Advertisement
in: Developing cases, Recognizable faces, Suicide by poison,
and 18 more

"Mary A. Anderson" was the alias used by a woman who died by suicide in Seattle, Washington.

In May 2021, it was announced that the King County Medical Examiner and Othram, Inc had teamed up in order to identify the decedent.

The zip code (11103) and the area code (212) that she listed are actual codes corresponding to different areas of New York City (Queens and Manhattan, respectively). The street and street number she used (132 East Third Street) are also valid addresses when used with the ZIP codes 10009 (in Manhattan) and 11218 (in Brooklyn). This suggests she had some familiarity with the general NYC area and Manhattan in particular.

She took cyanide mixed with Metamucil. As she died, she lay on the bed with a large, black Bible, reading the 23rd Psalm. This psalm is commonly associated with death and funerals. ("The Lord is my shepherd...")

Two days later, when she failed to check out, the hotel staff entered the room. They found the deceased dressed in all black, with full make-up (including pink lipstick). She had left a suicide note on hotel stationery:

"To Whom It May Concern.

I have decided to end my life and no one is responsible for my death.

P.S. I have no relatives. You can use my body as you choose." 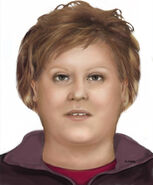 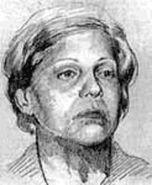