Janice Marie Young (born Janice Marie Brock) (June 17, 1957 - June 9, 1973) was a runaway from Virginia who died in St. Petersburg, Florida after being pushed in front of a moving vehicle. Young was identified in 2015, by her younger brother who had seen the reconstruction and alerted authorities afterwards.

Young was seen arguing with a man, identified as Lawrence Dorn. She was armed with a knife and a broken bottle. During the confrontation, she was pushed into the roadway and subsequently struck by a truck. She was dragged along the roadway, suffering extensive injuries, and died at the scene. The condition of her body remained disputed, as some stated she was "recognizable" and others reported she had suffered traumatic injuries.

Young was later buried in an indigent grave in Memorial Park Cemetery in St. Petersburg.

Dorn was charged with murder hours after her death. Eventually, a lesser charge of manslaughter was introduced, but ultimately, he was acquitted. Dorn's intent could not be proven, and he claimed the act was done out of self-defense. Some witnesses defended him, citing they heard the girl threaten him.

Two officers had spoken to to the victim prior to her death, regarding an unrelated case. She claimed her name was "Janice Marie Brock" and used the alias birth date of June 17, 1953. It was later learned she was not involved with the case police were investigating, yet it is possible she was involved with drug trafficking. Some reports state she had track marks on her arms from using intravenous substances.

She was known to use the aliases "Janice Marie Bromke," "Cindy," "Marie," "Maria" and "Sonja." The girl also stated she had borrowed clothing from friends and mentioned coming from various states in New England.

It was difficult for investigators to determine where she originated. Young had not spent long in St. Petersburg and claimed to be residing with a group of "hippies" at a residence on 700 11th Avenue. She had met them two days before her death. Prior to this, she may have spent time in the Reddington Beach area.

A letter found in her possession to a friend named "Gloria" gave details about other regions she allegedly spent time in, such as North Carolina and Virginia. The document lacked an address and had poor penmanship. She mentioned having friends with the names "Theresa," "Mark" and "Bill," the latter had given her a ride to St. Petersburg. Young mentioned she was "on break" when she wrote the letter, leading to the assumption she was employed.

In 2010, her remains were exhumed for DNA testing.

Marie's younger brother, Timothy Wayne "Tim" Young had searched for his sister after she ran away from their adoptive family in Virginia. He came across the case while searching for her by name on the internet, realizing the victim was more than likely his missing sister. Tim also noted a resemblance between Marie and the rendering created by artist Samantha Steinberg. He previously used her adoptive surname and found no results.

The pair had gone through a series of foster homes until they were adopted by the Young family. They were both abused; Tim once witnessed their adoptive brother raping Marie. She later packed some belongings in a pillowcase, saying goodbye and never returned.

Tim contacted authorities and DNA samples were utilized for the identification. Weeks before the 42nd anniversary of her death, the match was confirmed. Her remains were then transported to North Carolina and she was cremated. 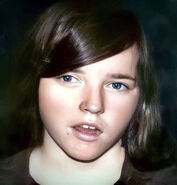 Reconstruction by the NCMEC

Newspaper article, around the time of Marie's death