Unidentified Wiki
Register
Don't have an account?
Sign In
Advertisement
in: Female, White, Homicide by stabbing,
and 12 more

Stabbing
"Margarita" was the possible name of a woman who was murdered in Tombstone, Arizona.

Margarita is buried in Row 2, Lot 20 at the Boothill Cemetery. Although the date of when she is killed is unknown, the Bird Cage Theatre opened on December 26, 1881 and the graveyard's last burials were in 1884, suggesting her death took place between then. 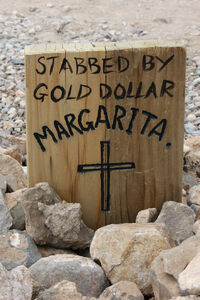