Unidentified Wiki
Register
Don't have an account?
Sign In
Advertisement
in: Featured cases, Male, Suicide by hanging,
and 18 more

Lyle Stevik was the alias used by a man who committed suicide in Amanda Park, Washington.

He was identified in May 2018 by the DNA Doe Project and, by the request of his family, will not have his identity released.

The man checked into a hotel, using the alias of a character in the book You Must Remember This who attempted suicide. He had also listed the address of a hotel in Idaho. The man was seen pacing along a street by the hotel after he checked in and he eventually moved to a different room because of noise coming from a nearby trailer park.

He hanged himself with his belt inside of a coat rack and left money "for the room," which was accompanied by a note reading the phrase.

In early 2018, his DNA was analyzed and extended relatives were identified in northern New Mexico and Idaho. In April 2018, it was announced additional relatives had been discovered in Utah and Colorado.

In May 2018, it was announced that the man had been identified using fingerprint comparison. He was from Alameda County, California, and was 25 at the time of his death. His family had never reported him missing as they assumed he was still alive but wanted to remain estranged from them. 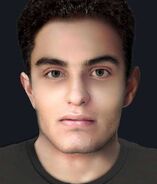 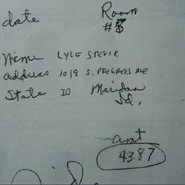