Lucille Marie "Peanie" Frye was a woman found dead in Pennsylvania in 1970. She was identified in 2018 after her family members submitted their DNA, suspecting that Jane Doe may be missing Lucille.

Frye disappeared on June 20, 1970 under unknown circumstances. Three months later, her nude body was recovered near Interstate 81. Her cause of death remained undetermined, but was noted to be suspicious.

Reconstruction by the University of South Florida 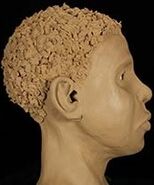