Unidentified Wiki
Register
Don't have an account?
Sign In
Advertisement
in: Male, White, Homicide by strangulation,
and 11 more

Strangulation
Long Beach John Doe was a teenage or young adult male found strangled in Long Beach, California in 1978. His body was left in a street not long after his death. 17 boys have been ruled out as the decedent.

At around 4:30 AM, on June 3, 1978, the victim was located face down in a prone position in the intersection of Division and Corona Street in Long Beach, California. He was pronounced dead at the scene and it was likely that his body had been dumped from a vehicle. While it was first believed he died from a drug overdose, an autopsy revealed he had been strangled to death.

Faded ink on his hand reading "PAID" suggested he likely attended some sort of party, event, or possibly a bar. His current age estimation is be below the legal drinking age at the time.

Based on his clothing, the possibility of him being a runaway or transient (for a long period of time, at the least) appears to be less-likely.

It has been theorized by internet sleuths that serial killer Randy Kraft was responsible for the decedent's death. Kraft was active between 1971-1983, and was known to strangle and sexually assault young men and children in the Southern California area. It has been confirmed that he has murdered a minimum of 16 men, including at least two who remain unidentified: Wilmington John Doe (April 1973), and Marion County John Doe (1980). However, it is believed he may have killed up to 67 men.

Kraft's modus operandi usually involved dismembering his victims and leaving them nude along highways after sexually assaulting and strangling them. This decedent was fully clothed, was not dismembered, and there is no mention of sexual assault in various case listings. However, 1980 Marion County John Doe, a confirmed victim, had not been dismembered and was also fully-clothed. There is also no mention that Marion County John Doe was sexually assaulted.

The location this John Doe's body was discovered was about a mile from the LGBTQ-friendly Ripples bar where Kraft often visited and selected his victims. 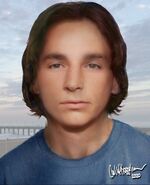 Before they were identified as different John Does, both David Stack and Jean Vincent were eliminated as possible identities for the victim. In addition, the following males were ruled out: