Unidentified Wiki
Register
Don't have an account?
Sign In
Advertisement
in: Male, Killed in action, Cases with Wikipedia articles,
and 10 more

Leonard Richard Geller is a United States Navy Sailor who was killed on the USS Oklahoma when the Japanese attacked Pearl Harbor on December 7, 1941. His remains were identified on January 9, 2018.

Leonard Geller was born on June 6, 1920 in Payne County, Oklahoma. At some point, he joined the United States Navy from South Dakota. He was assigned as a Fireman, First Class, to the USS Oklahoma.

At about 7:48 AM on December 7, 1941, the Imperial Japanese Navy Air Service conducted a surprise military strike against the United States at the naval base in Pearl Harbor, Hawaii. The USS Oklahoma was one of the first ships to be attacked. The ship was torpedoed and was capsized, killing Geller in the process. His remains were located between 1941 and 1944, but not identified. As a result, he was considered Missing in Action while his remains were buried in the Punchbowl at the National Memorial Cemetery of the Pacific in Honolulu, Hawaii.

Overall, 2,335 Americans were killed in the attack, 429, including Geller, were on the USS Oklahoma. The surprise attack led to US President Franklin Delano Roosevelt to declare December 7, 1941, "a date which will live in infamy". The following day, the US Congress declared war on Japan which led to the United States' formal entry into World War II.

After his death, Geller was awarded the Purple Heart. He was memorialized on the USS Oklahoma Memorial and the Honolulu Memorial of the Courts of the Missing in Honolulu.

In September of 1947, the American Graves Registration Service was tasked to identify unknown soldier's remains from the Pacific Theatre. However, they were only able to identify thirty-five of the crewmen from the USS Oklahoma. In October of 1949, the American Graves Registration Service ruled Geller, along with many soldiers whose remains were not identified, as unrecoverable.

In 2015, the Department of Defense and the Defense POW/MIA accounting agency initiated a program to exhume the unidentified sailors of the USS Oklahoma to try and match their DNA against the DNA of family members whose loved ones were never identified. Scientists at the DPAA used anthropological analysis and scientists from the Armed Forces Medical Examiner System used Y-chromosome (Y-STR) analysis to identify the servicemen.

Through these methods, Leonard Richard Geller was identified on January 9, 2018. On July 16, 2019, he was reburied with full military honors at the National Memorial Cemetery of the Pacific. Twelve relative attended the burial. 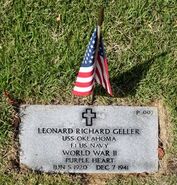 Geller's grave at the National Memorial Cemetery of the Pacific.