Lake County Jane Doe was a young or middle-aged woman found murdered in Sorrento, Florida in early December of 1991.

The victim, nude below the waist and raped, was found in the woods by a hiker about 75 yards north of Ethel Drive in Sorrento. Joseph A. Rolle Jr. was convicted of sexual battery on her and is currently serving a life sentence; no murder conviction was made, and he claimed to not know the female's name. 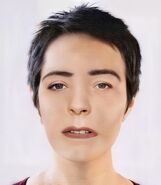