Gunshot (suicide)
"Kolb Skeleton" was a male found in the possession of photographer Emery Kolb in 1977. The remains had initially been found in the Grand Canyon in 1933.

The decedent may have initially been found in 1933. The remains were rediscovered after Emery Kolb's death. The exact date is disputed, occurring circa 1977-78 and/or 1980.

He was initially speculated to be Glen Hyde, who vanished in 1928, yet superimposition ruled this out.

Some sources state this decedent had died no earlier than 1972, despite the conclusion that the remains were the same depicted in Kolb's photograph. 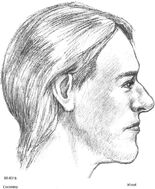 Photograph of the scene - the gun is visible in the center.