Homicide
"Kenneth Salnang" was a man whose remains were located in wooded area in Florida. He was possibly native to North Carolina and may have also used the name "Dakota".

Two boys found the man's remains in a dry ditch between US 98 and railroad tracks, near Tuskeegee Avenue in Dade City, Florida. Isotope testing indicates he was likely in Florida for the last few years of his life. 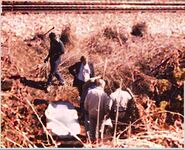