Unidentified Wiki
Register
Don't have an account?
Sign In
Advertisement
in: Female, Homicide by asphyxiation, 1960s births,
and 11 more

Jeanette Rose Tambe was a woman who went missing in 1984 from Bensalem, Pennsylvania. Her body was found 2 years later in 1986 in Atlantic County, New Jersey, she was found fully clothed with her hands bound, she was stabbed mutliple times and sulfuric acid had been poured on her face and chest. She was identified via DNA testing in 2012. 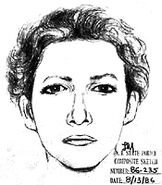