Jean Turner Ponders was a woman whose remains were found behind an abandoned house in Alabama in 2012. It was determined that she likely had lung cancer.

She was identified by Othram Inc. in mid-January 2022. 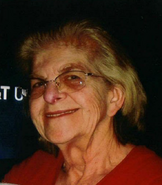