Unidentified Wiki
Register
Don't have an account?
Sign In
Advertisement
in: Female, Homicide by gunshot, Cases with Wikipedia articles,
and 19 more

Janet Lee Lucas was a woman whose skeleton was found in Missoula, Montana in 1985. She is believed to have been a victim of serial killer Wayne Nance AKA the Missoula Mauler. She was nicknamed Christy Crystal Creek because of the location where she was found.

She was identified with assistance from Othram Inc. in May 2021.

The victim was found by a bear hunter, scattered across a hillside. There were little clues as to the circumstances of her death. The murder weapon was a .32-caliber firearm and the bullets were Winchester/Western Silver Tip, solid nose or fully jacketed: Six land and grooves, right-hand twist, .051"/.055" land impression, which could have been fired from any of the following gun makes: Ceska, Walther, Llama, Star, Savage or Astra. The gun was not found at the scene, but two .32-caliber bullets recovered from skull.

Serial killer Wayne Nance, who may be responsible for up to six murders between 1974 and 1985, is the prime suspect in her death. Nance was never tried or convicted for any of the murders because he was killed on September 6, 1986 in a botched murder. She was the last unidentified victim of Nance; two of Nance's alleged victims, Devonna Nelson and Marci Bachmann were unidentified until 1985 and 2006, respectively. 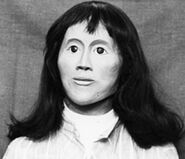