Unidentified Wiki
Register
Don't have an account?
Sign In
Advertisement
in: Female, Homicide by gunshot, Reconstructed by the University of South Florida,
and 12 more

Martha Jane Wever (known by her middle name) was a woman murdered in Florida by her boyfriend. She remained unidentified for nearly a year, until her unidentified case file was discovered by her friends and former neighbors.

Prior to her death, Wever had started dating a childhood friend of hers, after the death of her partner in 2010. Wever had previously been widowed in 1982. The man, Ralph Penrod, convinced her to move from Florida to Kentucky.

Wever began suspecting that Penrod was taking advantage of her generosity and refused to continue with supporting him with pension checks she recieved from her late husband. Penrod convinced Weaver, who missed her close friends, to move back to Florida alongside him, which may have been why she then began to give access to her pension once more.

Once in Florida, Penrod killed her in the wooded area where she would later be discovered. She was shot three times in the head.

Wever's badly decomposed body was discovered behind a truck stop in Wildwood, Florida. Authorities initially feared she was the victim of a serial killer.

Her friends, who communicated with Wever frequently, began to worry when she failed to contact them, as they were aware she was returning to Florida. The Kentucky State Police refused to file a missing person's report until months later, as she was an adult.

The victim's friends later recognized the University of South Florida rendering, alongside enhanced images of her clothing and glasses found at the scene from her Doe Network listing. The body was then identified as Wever.

Penrod was arrested in January 2014 and was convicted of first-degree murder. 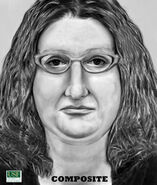