Unidentified Wiki
Register
Don't have an account?
Sign In
Advertisement
in: Male, Killed in action, White,
and 11 more

James Brazier Booe was a United States Navy sailor who was was killed on the USS Oklahoma when the Japanese attacked Pearl Harbor on December 7, 1941. His remains were identified on September 29, 2020.

James Booe was born on April 29, 1899 to Zebulon and Ida Booe in Veedersburg, Indiana, the youngest of five brothers. The family moved to Flager County, Florida in February of 1913, as Zebulon became manager of Haw Creek Farms. The Booe family greatly developed the area, with them being the first in the state to build a concrete silo and a dipping vat of livestock to eliminate the Texas tick fever.

Booe joined the United States Navy on June 4, 1919 at Jacksonville, Florida and did Boot Camp at Hampton Roads, Virginia. His military service number is 2671197 and he was a musician for the navy. He deployed to Panama on the USS Birmingham in 1922 and was also stationed on the USS Cleveland playing the trombone for the bands on the ship. He married Laverta LeBlanc on November 24, 1923 in New Orleans, Louisiana.

In 1925, he passed the examination for Band Master and began to serve as Assistant Bandmaster for the band stationed at Pensacola Naval Air Station in Florida. In November of 1927, he transferred to the USS Wright in port at Norfolk, Virginia and March of 1928 he was assigned to the USS Lexington at San Pedro, California. He returned to Pensacola in 1932. On March 5, 1932, he was returning from an Alabama trip and ran into the rear of a parked log truck about forty miles west of Pensacola, Florida. In October 1934, he was promoted to Petty Officer-Bandmaster and served aboard the USS California at Guantanamo, Cuba. A year later, he was the Bandmaster for the USS Saratoga and was selected with his musician group to play aboard the USS Houston when President Franklin Roosevelt had his vacation tour. Booe was eventually assigned to the USS Oklahoma as the bandmaster of the band unit.

At about 7:48 AM on December 7, 1941, the Imperial Japanese Navy Air Service conducted a surprise military strike against the United States at the naval base in Pearl Harbor, Hawaii. The USS Oklahoma was one of the first ships to be attacked. Just before the attack had occurred, Booe was having the band was preparing to play "To The Colors." The ship was torpedoed and was capsized, killing Booe in the process. His remains were located between 1941 and 1944, but not identified. As a result, he was considered Missing in Action while his remains were buried in the Punchbowl at the National Memorial Cemetery of the Pacific in Honolulu, Hawaii.

Overall, 2,335 Americans were killed in the attack, 429, including Booe, were on the USS Oklahoma. The surprise attack led to US President Franklin Delano Roosevelt to declare December 7, 1941, "a date which will live in infamy". The following day, the US Congress declared war on Japan which led to the United States' formal entry into World War II.

After his death, Booe was awarded the Purple Heart.

In September 1947, the American Graves Registration Service was tasked to identify unknown soldier's remains from the Pacific Theatre. However, they were only able to identify thirty-five of the crewmen from the USS Oklahoma. In October 1949, the American Graves Registration Service ruled Booe, along with many soldiers whose remains were not identified, as unrecoverable.

Booe's name is featured on the USS Oklahoma Memorial with his marble standard in Row 1 and the Honolulu Memorial of the Courts of the Missing in Honolulu, Hawaii.

Through these methods, James Brazier Booe was identified on September 29, 2020. 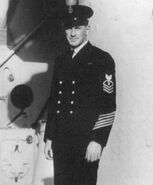