Presumed homicide
Isabel Sanchez Bernal (1972 - c. November 8, 2002) was a woman whose skeletal remains where found in a shallow grave in Mammoth Lakes, California.

She was identified in August 2021 through Othram DNA technology. Authorities also arrested Diego Santiago Hernandez-Antonia, a local resident of Mammoth Lakes, for her alleged murder. On April 5, 2022, Hernandez-Antonia was sentenced to 11 years for her voluntary manslaughter.

On May 25, 2003, a hiker's dog discovered a skull on a slope 1000 feet above Mammoth Lakes. Later in the week, more remains were found in a shallow grave at the top of a ridge called Mammoth Knolls.

The San Francisco medical examiner's office determined that the victim had been killed around August 2002. She was a 4-foot, 6-inch to 4-foot, 9-inch woman, 30-40 years old, and possibly Asian. DNA testing later revealed that she was of indigenous Mexican descent, specifically Zapotec. Her teeth were in poor condition, and she had likely received no dental care during her life. She had given birth at least once. Isotope testing revealed that the woman was likely born in southern California or northern Mexico and had later moved to southern Mexico or Oaxaca, where she lived for about a decade. She had been living in California for around two years before her death. 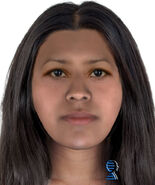 Composite of person of interest