Hamilton John Doe was a man whose skeletal remains were found in a forested area north of the intersection of Fiddlers Green Road and Glancaster Road in the community of Mount Hope, Hamilton, Ontario on April 9, 2007.

On the night of April 7, 2007, the skull was first seen by a couple of neighbors at the end of their driveway. One of them believed the skull was that of an animal's. And one of the neighbors kicked it across the road, where it landed inside a ditch.

On April 9, 2007 at 6:30pm, a Glanbrook resident was walking their dog along Glancaster Road when they observed an object in the ditch just off the west side of the roadway. They took a closer look and believed that what they were looking at was a human skull. A forensic anthropologist was later brought in to help identify and examine the skull.

On April 18th, 2007 at approximately 10am; Hamilton Police commenced a search of the area for any clues relating to the skull found in the woods, utilizing their Ground Search and Rescue Team, O.P.P. cadaver dogs and volunteers from the community.

Approximately one hour into the search, O.P.P. cadaver dogs located additional human remains near the intersection of Glancaster Road and Fiddlers Green Road in a heavily forested area.

An autopsy performed on the additional remains, eventually confirmed that they were a match to the original skull found. The date of death is estimated to have occurred in the summer or fall of 2006. However, an estimated date of death occurring in the Fall of 2005 or Spring 2006 cannot be definitively ruled out. Foul play is not suspected.

Hamilton Police have made several attempts to match this individual to similar missing persons cases, but no positive matches have came in so far. DNA was extracted from the femur found from the remains.

Jacket found on the body

Watch found on the body 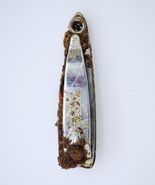