Unidentified Wiki
Register
Don't have an account?
Sign In
Advertisement
in: Female, Homicide by beating, Recognizable faces,
and 11 more

While she remained unidentified, she was known by the nickname "La Niña de las Calcetitas Rojas" (Little Red Socks Girl in Spanish).

Guadalupe was born in a abusive household, her parents never registered her for a birth certificate, and she was bounced around from home to home, some people say that at one point, she lived with garbage pickers.

Her semi-naked body, was found on a solar in Nezahuacóyotl, Edo. Mexico on March 18. She was beaten, bitten on an arm and sexually assaulted. The autopsy determined blunt force trauma as the cause of death.

An activist named Veronica Villalvazo (known as "Frida Guerrera") took on the case and asked two forensic artists to make a sketch of her.

She was identified by her two aunts on December 19, 2017. 5 days later, her mother and her step-father were arrested and charged with murder, child abuse and sexual assault. 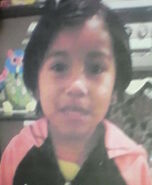