Gordon Edwin "Gordie" Sanderson, previously known as "Septic Tank Sam" (October 22, 1950 - c. 1977) was an indigenous man found murdered in a septic tank in Lindbrook, outside of Tofield, Alberta, Canada in 1977.

He was identified through genetic genealogy with assistance from Othram Inc., in late June 2021.

Gordie was born in Manitoba on October 22, 1950. At the age of nine, he was placed into foster care as part of the Sixties Scoop. In the 1970s, he was living in Edmonton, Alberta.

Gordie's remains were found in a 1.8-meter deep septic tank at an abandoned farmhouse, 13km west of Tofield (a community with strong aboriginal roots), by owners of the property who had been searching the old septic tank for a pump. Investigating officers described his death as "one of the most vicious, vindictive, and sadistic crimes" that they had ever encountered.

According to the autopsy, he had been tied up and beaten while his body had been repeatedly burned using a small butane blowtorch and cigarettes. He had also been sexually mutilated before he was finally shot in the head and chest. He was then rolled up in a yellow bed-sheet tied with nylon rope and dumped headfirst into the septic tank, which had been partially filled with water.

The killer(s) then dumped limestone into the tank in order to dissolve his body and therefore speed up the rate of decomposition. However, unbeknownst to them, when quicklime is combined with water, only a small degree of superficial burning will occur with a large amount of body tissue becoming dried out, resulting in his body being relatively well-preserved for the time it spent in the tank. Even so, his remains were so badly mutilated using a sharp object that it took an Edmonton medical examiner months to determine whether the remains were male or female.

Medical examiners sent dental records to over 800 dental practitioners in the Alberta area-even having them published in Canadian dental magazines and nationwide bulletins-but strangely, no leads as to his identity were uncovered, and he was laid to rest in an unmarked pauper's grave in an Edmonton Cemetery.

His body was exhumed in 1979, and a forensic pathologist named Dr. Clyde Snow from Oklahoma was brought in to reconstruct the skull in order to help with identification. Dr. Snow took numerous measurements of his skull and bones, and input the information into a computer program, which indicated that Sam was likely of aboriginal heritage and approximately 35 years old, disputing the original claim by the medical examiner that he had been a 28-year-old Caucasian man. DNA samples were taken, and facial reconstructions were posted in various newspapers around the country.

According to authorities, Sanderson was last known by his family to be on his way to visit his brother in Calgary, Alberta, and that he had been murdered by someone who knew him along the way.

The investigators believed that he may have been transient, a migrant worker, or otherwise not a long term resident of Alberta. Based upon his clothing, he was suspected to have been a construction worker or farm laborer. It is likely that his killer(s) knew the area well and chose the remote location in the belief that the body would not be found for a very long time. No evidence was found to suggest that he was murdered on the property itself. The investigation is still ongoing.

On June 29, 2021, an article was published by The Fifth Estate in Edmonton claiming that Sanderson had finally been identified by the RCMP with the help of genetic genealogy performed by Othram, Inc. after 44 years, and was later confirmed by police at a virtual news conference on June 30, 2021. 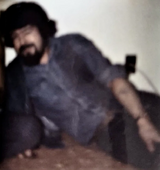 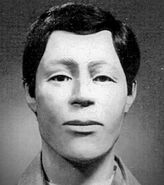 Approximation of footwear
(not the item recovered with victim)