Not stated
Fulton County John Doe was a man whose skeletal remains were found in Georgia in 1980.

A photograph of a young girl with "Sept. ___ 4 years old" handwritten on the back, a letter addressed "Dear Dad" and signed by "Pam + Dwight" or "Pam T Dwight", and a faded photograph that may have read "HR Bow dyeing and finishing, 278-3448" were all found among the man's possessions.

A bus ticket, possibly from Panama City, Florida, was also found. He was wearing a blue shirt with work pants.

Closeup of the girl

Image adjusted for lighting only

Touched up photograph of the girl 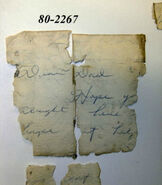